Aiming for the Moon: Daniel Roberts 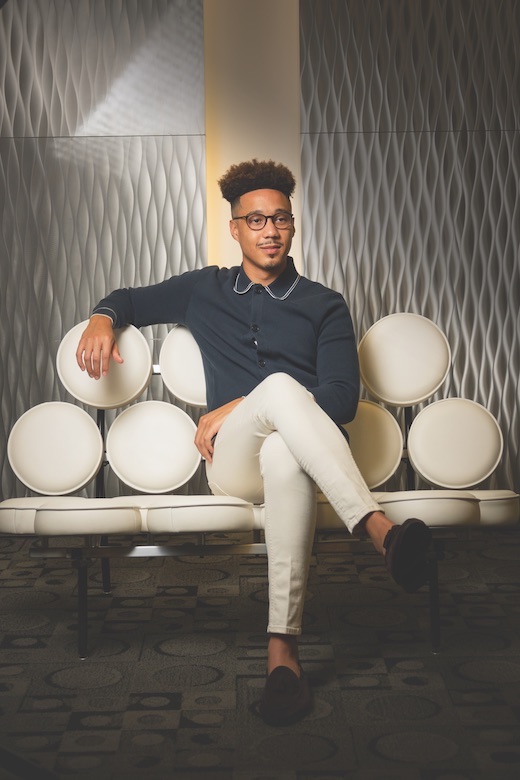 By Annie Rhoades for the Ole Miss Alumni Review, Winter 2021

Welcoming Queen Latifah to the White House, working on Capitol Hill as a legislative correspondent and interning in the social office of former first lady Michelle Obama are just a few of the highlights alumnus Daniel Roberts (BA public policy leadership 14), policy communications manager for Facebook, can boast on his resumé — all before graduating from UM.

“I went up to D.C. my junior year and was supposed to go for three months and come back to campus to finish out my senior year,” Roberts recalls. “But I just fell in love with D.C. so much that I ended up never coming back to campus. I found a way to graduate from afar and finish my honors thesis while working full time for [the late]Congressman [Elijah] Cummings.”

A self-described “army brat” from Moss Point, Roberts was the epitome of an “overachieving” high school student with dreams much bigger than his Mississippi Gulf Coast roots.

“I was very determined to not only go to college but to get all of my college paid for,” Roberts says. “During my time at Moss Point High, I applied to so many scholarships, I received about $900,000 in scholarship offers — which is crazy.”

Despite the outpouring of offers from across the country, Roberts knew if he stayed in Mississippi for college, it was Ole Miss or nothing.

After organizing a nonviolence walk in his hometown in light of a recent murder, Roberts gained attention in the press and caught the eye of Sen. Trent Lott (BPA 63, JD 67).

“I applied to Ole Miss and the Trent Lott Leadership Institute, and I was fortunate enough to receive the Trent Lott Leadership Scholarship,” he says. “I went to lunch with [Sen. Lott] later on, and he told me how he saw the article and that was one of the things that really helped him realize how involved I was and how I would be a great person to come to Ole Miss and benefit from the scholarship.”

Roberts’ achievements continued at Ole Miss, where he was enrolled in the Sally McDonnell Barksdale Honors College, named to the Student Hall of Fame, a member of the Chancellor’s Leadership Class and Columns Society, and president pro tempore of the Associated Student Body. He also participated in the study abroad program, spending time in Ecuador, Germany and South Africa.

“I was a huge overachiever in college, but I think the culmination of my Ole Miss experience was my time interning at the White House for first lady Michelle Obama,” he says. “I really attribute Ole Miss to so many of the opportunities I had through studying abroad and through the Washington Internship Experience. It was what set the groundwork and allowed me to get a full-time job in Congress before I graduated.”

Friend and fellow Honors College alumna Kendra Redding (BSN 15, MSN 18), critical care registered nurse at Mississippi Baptist Health Systems in Jackson, is not at all surprised by the achievements of her “biggest supporter” and “personal adviser.”

“Daniel and I first met freshman year of college,” Redding says. “I chuckle to myself when I think back to college when I frequently used to think to myself, ‘Daniel is going to be the president one day!’ I laugh because it just goes to show how much confidence I had in him, his abilities and his future. While the presidency isn’t on Daniel’s radar these days, I wholeheartedly believe that if that was a goal he wanted, it was Roberts with his parents, Ruben and Debra, at Commencement a goal he could have achieved. For [him], the sky is the limit.”

In 2013, Roberts accepted an internship in the social office of Michelle Obama, helping to coordinate all the major events attended by the first family at the White House.

“Events ranged from a governor’s ball one evening to a Medal of Freedom Award [ceremony] the next day,” he says. “My favorite memory was the Memphis Soul concert with PBS. Justin Timberlake and Queen Latifah came, and I was assigned to escort Queen Latifah around the White House for two days — that was crazy!”

Besides all the fun moments he enjoyed, the significance of the internship was not lost on him.

“Getting that internship was one of the happiest moments of my life,” Roberts says. “Being an African American from Mississippi and seeing a person that looks like you in the White House — which had never happened in history — and then having the opportunity to go and work for them … the gravity of that moment felt so heavy and so pure. I get tingles thinking about it.”

While completing his internship, he was offered an opportunity to work as a legislative correspondent on Capitol Hill. A member of Kappa Alpha Psi Fraternity, Roberts made the difficult decision to accept the position and forgo his senior year at Ole Miss.

“One of my fraternity brothers said, ‘You can’t do this. Do you really want to miss all of the football games? This is your last chance to really be free and have fun,’” Roberts laughs. “Thankfully, I had people in my life who were sounding boards and just told me to take a breath and pause and realize that [my] career will always be there, but this moment won’t be. I finally made the decision to stay in D.C., and I tell people that’s the best decision I could have ever made.”

A mentor and advocate, U.S. Rep. Cummings asked Roberts to make a promise.

“He was the person who took a chance on me,” Roberts reflects. “Giving a senior in college a full-time role on Capitol Hill as a legislative correspondent is rare. A lot of people who graduate would kill for those jobs.

“I’ll never forget, he looked me in my eyes and said, ‘Look Daniel, I have faith in you. I’ll give you this job, but the one thing you have to promise me is that you will graduate.’I get teary eyed even thinking about it because he saw more in me than I saw in myself. That was the foundation that really allowed me to do a lot of things that I’ve been able to do in my life.”

After a year in that role, Roberts worked as legislative correspondent for federal relations for the National Governors Association. Eager to return to the White House, he began serving as legislative analyst in communications and legislative affairs for the Office of Management and Budget in 2015.

“In this role, I was able to learn the ins and outs of how to talk to the press and how to develop messaging,” Roberts says. “At the end of it, I was promoted to pretty much draft President Obama’s statements on policy. Anytime a bill was going to be passed for Congress, I was the person that would write his opinion on the bill, and then issue his veto threat.

“If you can imagine, a young 24-year-old at the time doing such a crazy role. I was up all night grinding my teeth and constantly stressed, but it was the coolest, most fascinating job I’ve ever had. Being able to walk into the White House every day and know that the work you’re doing is actually moving the needle in policy — not just in the U.S., but the globe — was incredible.”

With the Obama Administration drawing to a close in 2016, Roberts knew his time at the White House was likely coming to an end. On the advice of mentor Ashley Etienne, communications director for Vice President Kamala Harris, he made the leap from public to private sector and accepted a position in crisis communications with Edelman, a public relations and marketing firm in New York City.

“That was a really tough transition,” he says. “It was hard to explain to the private sector how your skills are transferrable. [Ashley] told me the best way to really get communications (particularly public relations) experience is to go to an agency. When you’re at a firm like that, you’re dealing with multiple clients at a time, trying to land stories and building relationships with reporters.”

After spending a year with Edelman, Roberts became interested in the entertainment industry and made the move to Viacom to serve as international communications manager.

“I got to go to the BET Awards, the Kids’ Choice Awards and the MTV VMAs,” he says. “We would do publicity and organize interviews with the celebrities, influencers and the press. That was really fun.”

With a love of policy and the urge to shift into an industry that could see regulation and political implications, Roberts decided to break into the technology industry.

He worked as head of East Coast communications for Lyft for less than a year before landing his current role of policy communications manager at Facebook.

“I was so excited that Facebook offered to move me back to Washington, D.C., because New York is a terror,” Roberts laughs. “It is nonstop stressful every single day, so I was happy to get the offer to come back.”

In his current role, Roberts serves as a spokesperson for tech policy and diversity issues of interest to officials at all levels of the U.S. government, including the administration, Congress and state and local governments.

“The people I work with at Facebook are some of the most brilliant people I’ve ever met,” he says. “They’re so smart, so savvy, and their work ethic is infectious. It makes me want to do more and be more creative. I also really enjoy working with reporters to shape and frame stories and put out the facts.”

While he attributes a large portion of his career to taking “calculated” risks, Roberts also stresses the importance of having not only mentors but advocates in your life.

“One of the things I admire the most about Daniel is his optimism, his unwavering faith in God and the strength he has through him,” Redding says. “I think one of

the main reasons for Daniel’s success is that he has no expectations for failure. From the day I met him, his only option was success. His only trajectory was up. He knew what he wanted, visualized it daily and had no fear of going after his vision. Daniel is the type of person that easily inspires others to dream big and go after the life they want.”

For Roberts, the relationships he’s built over time, as well as having people speak up on his behalf when he’s not in the room, have been critical to his success.

“Take those calculated risks, and have those people in your life that are mentors,” he says. “Build a board of advocates that are there to not only guide you through your decision making, but also fight for you and elevate you when you’re not in the room.

“It’s not about networking, it’s about true relationship building. When people hear the word networking, they think of casual encounters and exchanges, while for me it’s been people who’ve actually helped me get to the next part of my career. People that have seen my work and are willing to put their name on the line.”

“My parents always told me: ‘Aim for the moon, and if you miss, you’ll be amongst the stars,’” he says. “Throughout my life, I’ve shot for the biggest, boldest, wildest opportunities in the world and was able to reach a lot of them because of my parents and God. I had that support at home that really pushed me to believe that I can honestly do anything.”